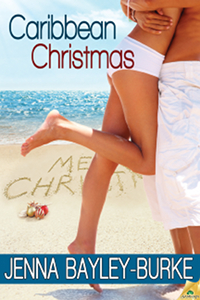 Caribbean Christmas
Under The Caribbean Sun, Interlude 1
by Jenna Bayley-Burke

‘Tis the season for unwrapping the gift of pleasure.

When Saskia snags a last-minute ticket home to the Caribbean isle of Anguilla, she intends to surprise her workaholic father and to reconnect over Christmas. When she finds he’s away on business, there’s still plenty to fill her time while she waits. Sailing, snorkeling…and an unexpected, very adult attraction to her girlhood crush.

Joe Prinsen is certain Saskia has returned to the island only to ask for money. He feels it’s time she learns the truth about her father’s depleted financial situation from the man himself. And he intends to make sure she sticks around long enough to hear it.

Except the girl he remembers has matured into a devastatingly sexy woman. She’s taking all his noble intentions and unwrapping them, one by one, until their shared desire is revealed in the warm Caribbean water. Saskia’s only home for Christmas. And once she finds out the secret he’s hiding, she’ll no doubt leave the Caribbean, and him, for good.

Product Warnings :: The only thing hotter than the tropical sun is the sex—in the surf, on the water, against the bookcase… Readers will be wise to monitor electronic devices, and themselves, for overheating.

By the time they got their clothes on and made it back to his truck, Joe knew he’d made a critical error. She’d taken off her dress and his brain had shorted out. That never happened. Even as a hormonal adolescent he’d been able to think with the right head.
As he jammed the truck in gear and climbed the gravel road up the hill, he tried to think of anything but that Saskia wore nothing beneath the wisp of a dress currently plastered to her lithe body. His dick was still telling him to race home, and his brain had to agree. He needed to get home and get his ass in a cold shower.
He might have to stay there all damned night to make sure he didn’t do something stupid. Again.
Maybe if this damned island were bigger, he would have figured out his next move by the time he pulled up beside the house.
“Someone is in a hurry.” Saskia undid her seatbelt and climbed out of the truck.
He winced, realizing she thought he’d powered home for an entirely different reason. He rubbed the tense muscles in his neck, willing his mind to come up with some kind of escape route. Some way to rewind time so he hadn’t been stupid enough to get in the water.
But thinking brought to mind visions of Saskia naked, the feel of her nipple ring beneath his tongue, the taste of her. Maybe the only way out of this was to chop his own head off.
Either one would do.
He huffed a breath and got out of the truck, peering in the darkness for Saskia. The water had reflected the moonlight, but up here the world had been reduced to dark outlines. He thought of how she’d bounded towards the hammock when she’d first arrived and checked there. Finding it empty, he climbed in himself.
Maybe he could fall asleep out here, dream up some solution and fix everything in the morning.
“You’re kind of freaking out, aren’t you?”
The sound of her voice startled him and his heart hammered even faster. “I’m sorry.”
She had a sweet laugh, light and almost musical. “Sorry that the two minutes it took to drive here gave you time to have second thoughts and now your balls ache? Or sorry that in your head I was still a bratty kid and now we’re about to do some amazing things on your bed?”
“Both?” Neither. She was Dutch’s daughter, but it was more than that. She’d somehow had the power to make him stop thinking. He’d done that once before and wound up wrecked.
“It’s very sweet that you want to be noble.” Her voice moved closer, yet he still startled when she laid a hand on his chest. She trailed over the contours of his muscles, pausing to roll a nipple between her fingers. Damn if it didn’t seem connected to his cock. “Or do you want me to come on to you? Is that your kink?”
“You are awfully interested in kinks. Every time you ask I wonder what yours is.”
“I’m working on it.”
He bit back a groan. “Listen, we need to slow this down.” To a dead stop. He tried to remember why he’d been so frustrated with her just a few hours ago, but there was too much testosterone flowing through him for logic.
“I don’t beg. So if that’s your thing, you’re going to have to get over yourself.” She pinched his nipple, but didn’t release it. Just kept holding until the sharp pain eased, a heavy ache taking its place. “Do you want to take me upstairs?”
“Yes,” his traitorous mouth spoke for him. No doubt his greedy tongue wanted more of her. “But I’m not going to. You just got here, and you were drinking tonight…”
“I drank champagne.” She released her hold, only to flick his tender peak with her fingernail. He covered the spot with his hand, pressing to hold the feeling in. “But I do have one request.”
“You can have any room you want. I’ll stay out here.”
“Johannes.” Her hot breath puffed against his ear, her hair whispering against his shoulder. “No touching yourself. If you’re hard for me, it’s for me, not for you.”
Her words went straight to his cock, filling it and deepening the ache in his balls. He wanted to squeeze himself, but didn’t. It was only fair.