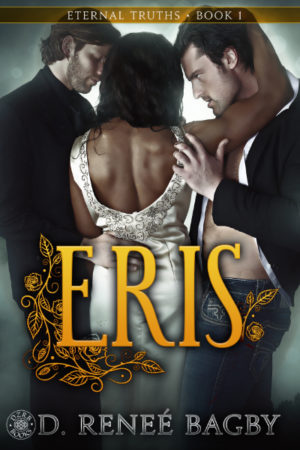 Immortals Lucien and Ranulf have survived to see the modern era to be with the woman they both love once more. Equally anticipating and dreading the reunion, they’ve vowed to let her decide which of them she wants to be with. But are they prepared to let one woman end a friendship that has lasted centuries?

Eris has just started her dream assignment. She’s not looking for an office romance, but her new bosses aren’t making it easy for her to avoid it. And right when she gives in to their joint seduction, she ends up tossed back in time to the medieval era where the men she loves have no clue who she is. What’s worse, they think she’s the enemy.

The Lucien and Ranulf of the past are rough and dangerous. Eris is doing everything she can to survive them while searching for a way back to her time. But returning home means confronting an undeniable truth, one that could end their relationship forever. It’s up to her to decide if her heart is strong enough to handle the love of two men and the reality of their enchanted existence.

The office door was ajar, as if one of the men had swung it closed but it hadn’t latched.

“We can’t keep doing this. You saw what almost happened yesterday. Every day we’re with her it gets harder. And what about when she returns?” Lucien asked in a rough voice.

Eris stopped with her hand on the knob. She? What she? They weren’t talking about her. She hadn’t gone anywhere.

Ranulf said in hushed tones Eris strained to hear, “Stop thinking about it. Eris is here now. That’s all that matters.”

“No, it isn’t. You’re a fool to think otherwise. Everything will change when she returns. You know that as well as I do.”

“We can’t. She wouldn’t understand.”

Lucien heaved a long, annoyed sigh. “Fine. You’re right, as usual. We’ll worry about it when it happens.”

Eris slowly released the knob, trying not to make any noise. She wanted to rush into the room and demand to know what they were talking about. Except the scared part of her didn’t want to know. She backed away quietly.

Whatever Lucien and Ranulf spoke about wasn’t any of her business. Not right that moment. It was cowardly, but she didn’t want to find out what they were keeping from her and then end up losing them.

She hurried to the front door. First, she had to save the family computer from her mother, and then she would worry about Ranulf and Lucien and whatever secret they were keeping.

“Eris?” Ranulf called. “Where are you headed?”

She didn’t stop walking or even look at him when he caught up with her. “I have to leave for a little bit. My Mommy called with an emergency.”

“Nothing serious, I hope.”

“No. She’s just trying to kill the computer, and I have to stop her. I’ll be back in a few hours.” She wanted to get away from him and think about what she’d heard. Or not think about it.

She stopped and looked up at him. “Excuse me?”

Lucien joined them. “Good time for what?” He looked between them.

Eris couldn’t believe they were acting as if nothing was wrong, smiling and joking. She wanted to scream at them to stop lying to her. If they were lying to her. Instead, she said, “Nothing. I’ll be back.”

Ranulf caught her arm before she could walk away. “Eris, is something wrong? You seem angry.”

What are you hiding from me?

Who is this other woman you were talking about a moment ago?

When is she coming back?

They were all questions she wanted to yell. Looking into Ranulf’s eyes, she couldn’t utter one of them. She took a breath and shook her head. “It’s nothing. I’m just distracted.”

He cupped her cheek, and she stopped herself from pulling away. “If you don’t want me—”

What was she thinking? She didn’t want them meeting her family if they would dump her soon. And what about last night and all that talk about being prepared?

“Eris?” Ranulf leaned into her.

She turned away and headed out the door. “If you’re coming, then you need to move it. I have to beat Alphie home and fix whatever My Mommy broke.”

Lucien said, “I think I’m looking forward to meeting Alphie the most.”

They piled into Eris’s car, and she left black skid marks in her wake.