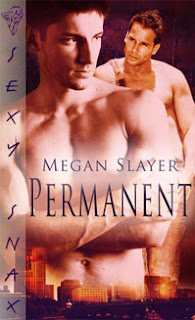 River Cortland trusted the person he loved. His faith couldn’t protect him from the bitter sting of a cold-hearted Domme. If he’s going to learn to trust again, he’s got to deal with his past. His roommate and best friend, Tory, has seen the physical damage and hasn’t walked away. Can he deal with the emotional scars as well?

Tory McClellan wanted the carefree life…until one night with River changed everything. There’s more to the shy art teacher and Tory wants to know everything-how he tastes, the scent of his skin, the feel of his body as they make love. What terror lies behind River’s brown eyes? Better yet, how can Tory make the sadness go away and be in River’s life, permanently?

(Have your bucket of ice water ready)

“If you’re in, I’m in. Women aren’t worth the hassle.” He grinned and rested his hand on River’s thigh. “You seem happier overall. I like it.”
River stared at him a moment to regroup his thoughts. Tory McClellan, sportscaster for News Channel Twenty-Five, wasn’t the type of guy to swear off chicks. Women practically fell at his feet. As Tory appraised River, he swore his body temperature kicked up a thousand degrees in reaction. Tory parted his lips as he brought his bottle to his mouth once more. What did he taste like? River glanced down at the bulge in Tory’s jeans. He’d seen him stroll out of the shower plenty enough to know Tory wasn’t lacking. Even soft, he made River look small. River shifted in his seat. He wanted to lick Tory’s abs. Just follow the solid curves until he ended up at the pleasure trail of tawny hair leading to his cock. Tory never said anything outright, but River sensed Tory’s inner desire to dominate and keep control. Made sense, but hell, would he freak if River made an advance?
“You’re not really gay.” Oh, that sounded smart. Damn it. River shifted as Snowflake sniffed the air and stretched. She scampered onto the floor, flicked her tail in the air in her silent ‘screw you’ and left Tory and River alone on the couch. Even she thought he sounded stupid.
He turned back to Tory and gasped. Cocoa glittered in the depths of Tory’s eyes as he licked his lips. If he moved a little closer, River would be able to feel the texture of Tory’s lips against his.
“You never asked,” Tory murmured, swiping his tongue over the peachy skin. “And I wasn’t about to make a move that night.”
Jerked from his more than too personal appraisal of Tory’s mouth, River stared. “Huh?”
“You suck at subtlety. I know you look when you think I don’t see and I remember the way your body reacted when I held you. I liked it.” He closed the gap between them until only a breath kept them apart. “I’m not innocent and I have done some experimenting.” He inched closer, his arm and knee bumping River’s. “But I’ve waited too long for you to make a move.”
Not innocent? Experimenting? Make a move? If River didn’t know him better, he’d think Tory was attracted to him. The guys who tried to pick River up weren’t nearly as handsome as Tory. Most of the women hardly held a candle to Tory’s natural charisma.
“River?”
River opened his mouth to reply, to tell Tory he had no idea what he wanted him to say. This will change our friendship? Duh. Being with me will seriously screw up your reputation at the station? Without a doubt. I’m head over heels in lust with you? Oh hell.
Instead of answering, River fused his lips to Tory’s. The guttural moan erupting from Tory’s throat spurred River on. He fisted the sleeve of Tory’s T-shirt in his hand. Holy fuck.
The more River tasted Tory, the more he wanted from him. River cupped Tory’s jaw, the rough stubble prickling his palm.
Tory broke the kiss long enough to click off the television. His eyelids drooped. “Take off my shirt.”
Holy shit.
River didn’t think. He acted. He’d guessed right about Tory—the guy really did have a deep-down need to dominate. Now was the time to take his chance and live out his fantasy with Tory. River yanked the hem of Tory’s shirt up over his head and tossed the discarded clothing into the hallway. His nipples beaded. Cold air? Or arousal? River wasn’t sure.
“Taste me.”