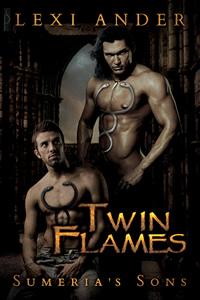 Tristan Janick is a Lycan descendant of Gilgamesh and Enkidu, an average Warrior of Anat. He has found his Twin Flame, the one person who’s supposed to love him unconditionally. Betrayed, broken, and dying, he dissolves the sacred bond and leaves.

His best friend, Ushna, vows to guard and protect him, always close but never touching. Waking up from his half-life after a hunt gone badly, Tristan realizes he’s in love with Ushna and sets out to seduce him.

Ancient secrets and lies are revealed, setting off a chain of events that tests not only Tristan and Ushna’s love, but challenges their ability to stay alive when creatures of myth awaken, and absent Gods walk the Earth once again.

This was new. I raised my hand to wave bye to Randy and the guys as Ushna jerked me out the door. The drive home was tense and quiet but I was willing to wait and see where this would go. The closer we got to the house with nothing said, well, let me just say I was cussing up a storm in my head.
As I got out of the truck, Ushna grabbed me by the arm. “What in the hell do you think you’re doing?”
He was angry, angrier than I ever remembered seeing him. His lips were pressed into a thin line, his emerald eyes sparked with fire, and the tension was coming off his body in waves. Only a fool would miss the signs.
“What do you think I’m doing, Ushna?”
“The hell if I know anymore, Tristan. You’re walking around here practically naked, shaking your ass at anyone who will look. Getting groped all over the dance floor by those women―was there a woman who didn’t put her number in your pocket? I’ve never known you to act like a slut before.” Ushna said the last with so much disgust it stung.
And I thought I didn’t have any pride.
I stepped closer to him and looked up into the green eyes that I loved. “I wasn’t shaking my ass just for anyone, Ushna. I was shaking it for you, you fool.”
With both hands, I grabbed his hair, pulled his face down, and kissed him like I’d wanted to kiss him all this past week. I kissed him like it was the only kiss I’d ever get from him, because I knew now, he didn’t want me, not like I wanted him, so this was the only kiss I was going to get. I made it good. I savored his lips, tasted him, and tried to memorize him.
When I pulled away, I glanced at into his round, shocked eyes. I gave him my best crooked smile and a friendly pat on the shoulder. I tried to convey without words that I was sorry and everything would be all right. I don’t think I could’ve spoken at that moment so I turned around and sprinted up the steps into the house.
I didn’t go to my bedroom and I didn’t want to be in the house so I went straight out the back door, shedding my clothes as I went. I had barely stepped outside when I submitted to the wolf.
I needed to run off my disappointment and sorrow. I’d known there was a possibility Ushna didn’t see me as anything more than a friend. I’d hoped for more, I’d gambled on it and lost. As I chased stringy jack rabbits I tried to convince myself it was okay. I didn’t have to have Ushna in my bed to love him. I’d love him anyway he’d let me. So I hunted rabbits and chased a coyote out of my territory. I rolled in the dirt, snagging a burr or two in my fur that took forever to scratch out before I headed home.
Ushna was waiting for me on the porch. He leaned against the frame of the back door, his face in shadow, arms crossed over his chest. It was a good thing I’d brought a peace offering; I dropped the rabbit in my mouth at his feet.
I padded to the door, hoping he’d open it for me because I really didn’t want to talk to him right now. As far as I was concerned, breakfast was early enough to have this discussion. But he didn’t move, so if I wanted to go in I’d have to change back.
I allowed myself to fall back into my human form. I opened my eyes as I crouched naked on the porch. I’d never wanted to cover up my body more than I did in that moment. I felt vulnerable and exposed as Ushna stared at me. I stood and went to the door. I was determined to get to the relative safety of my room.
“Tristan, I didn’t know…”
I interrupted him. I really, really didn’t want to have this conversation now when the pain of his rejection was still so close to the surface. “It’s fine. We’re fine, it’s okay.” I reached for the door knob and Ushna grabbed my hand.
“Damn it, would you stop for a minute,” he growled.
Okay, we were going to have this conversation now. I pulled in a breath and looked up at Ushna. “Okay.”
“I didn’t know you were trying to get my attention. You’ve always shied away from touching me so I didn’t think you’d ever be interested, I thought there was something about me…”
“Ushna, it wasn’t you. Any touch hurt. I’m so sorry. I didn’t mean to hurt you. You have to know I’d do anything for you.” My chest hurt but I refused to reach up and rub it.
“Is that what this is, you doing something for me?” His voice was low, guttural, his eyes searching my face.
“Goddess, no,” I breathed, taking a step closer to Ushna, my hand still in his as I reached for his waist, “this was me wanting to love you.”
This time it was he who kissed me. No, he didn’t just kiss me. He devoured me, and Goddess help me, I let him.