So I totally overestimated my ability to come up with thirty-one little known facts about ERIS (Eternal Truths, Book 1). I think I’ve pretty much exhausted every little fact about the book that doesn’t contain spoilers. So I’m switching gears and putting up LKFs for the rest of the month about my other two novels. 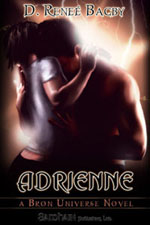 Somewhere in the middle of writing the first draft, I decided that Malik showing up to kidnap her from a high school probably wouldn’t go over that well, eighteen or not. So I switched it to college, thus making her older in the process.