There is a good explanation for the title of this post. I’m more than a little peeved about some events that transpired recently.

I held a Halloween contest on my promo blog and mailed out several prizes. Three winners received posters — book cover posters of four of my books, a signed cover flat, some promo pens, a Sherrilyn Kenyon poster I got during Dragon*Con, and another random poster I also got at Dragon*Con.

Knowing I would be mailing these posters out I wanted to use the triangle poster boxes rather than poster tubes. USPS offers these boxes at no charge (that includes shipping). Free beats $3-$5 plus tax per box any day. The triangle boxes don’t curl the posters as much, so they are easier to flatten once they arrive at their destination. Though one would hope they arrive at their destination intact.

I received an email from one recipient yesterday who said she got her prize package and this is what it looked like: 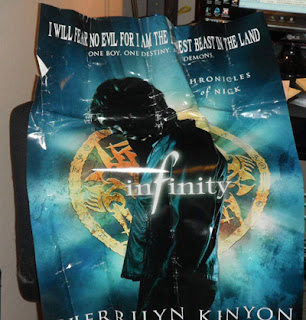 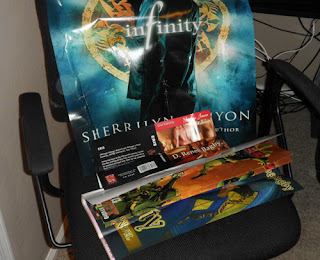 (Note: These pics are posted with the recipient’s permission.)

All I could say after the recipient sent me these pics was WHAT THE FUCK!!!? I ordered those boxes from USPS.com. They were pristine when I mailed them out. A little too long for the posters they held, but that wasn’t an issue.

A few of the posters can be replaced, and that’s what I plan to do. I’m shipping them in a mailing tube this time around.

I’ve emailed USPS.com about this situation, though I’m not expecting anything worthwhile from them. They’ll probably send a lip service apology and a note that next time I should insure my packages if I want them to care.

I have mailed hundreds of dollars worth of stuff with USPS and never EVER has anything arrived at its destination looking like that. It’s almost like someone ripped it open expecting something important, stomped all over it when they realized the contents weren’t valuable, and then taped it back together. Or maybe the box was dropped and then run over by the PO truck. There are so many speculations as to what could have happened to that box.

This isn’t the first issue I’ve had with USPS, only the most recent. I think it may be time for me to start pricing the competition.