Any fan of World of Warcraft (WoW) knows EXACTLY who Illidan Stormrage is. 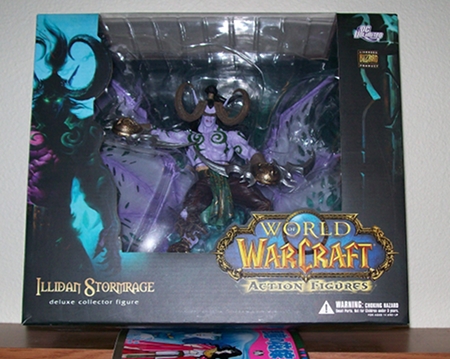 That’s him. And yes, he is still in his original box. I have never opened it, and I never ever plan to take him out. It’s partially the collector in me, partially because he’s easier to move in his box, and partially because I want him to stay “new” for as long as possible. Oh and he’s much easier to keep clean in his box.

I have loved Illidan Stormrage from the first moment I saw him. I have never played WoW (I leave that to my hubby), but I love a lot of the character designs. I want a Deathwing figure next.

In fact, Illidan inspired the bhresya of SERENITY. Up until I saw Illidan (and the movie 300) I had a rough idea of how the bhresya looked but nothing concrete that I could describe. Illidan helped with that, but internet pictures weren’t enough. I had to have the figure too.

He’s still an inspiration since he’s basically the model for Chigaru… except Chigaru is burnt orange and his horns curve forward in front of his face instead of back over his head like Illidan. Oh and all bhresya have feet, not hooves. 😛