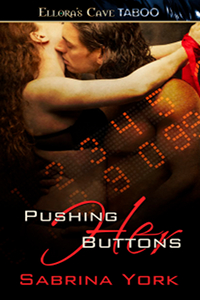 Pushing Her Buttons by Sabrina York

Every single day, he’s there. Waiting. Watching her. Closed in with her for a hundred stories as they ride the elevator to their floor. And every single day, for a hundred floors, Samantha simmers with banked lust. She wants him—her mysterious neighbor who seems to get off on tempting her. Whose eyes promise the kind of kinky domination she’s too afraid to give in to. And then just when she thinks she’s safe, just when she’s convinced she can resist his allure, he steps up his relentless pursuit. The passion that flares between them burns so hot and so bright it could consume them both.

But that’s just on the way up. Who knows what will happen when they’re going down.
Reader Advisory: Samantha’s sexy neighbor tries to drive her wild with lust, and he’ll stop at nothing to succeed. Spanking? Of course. Leather straps? You bet. Girl-on-girl action? Oh yeah. Wear your flame-retardant panties while reading this one.

I almost got off the elevator when he stepped on, that slick sophisticated creature oozing with masculinity, the man who haunted my dreams. He could turn me into a bundle of jangled, weeping nerves with a look.
So I didn’t look.
This took some effort.
I wanted to, was drawn to the energy, the intensity, the heat rolling off him in waves. Instead I diligently studied the sleek chrome of the elevator doors as they slid silently shut.
We were alone, together, in a box. Again. For a hundred floors.
“Going up?” His voice was a slithering snake, raspy, undulating and smooth.
I nodded. A short, curt dip of my head.
From the corner of my eye, I watched as he pressed the button for our floor. His thumb was long and blunt. He did it slowly, caressing the face. As though making a promise.
And all the while, he stared at me. Tracking my every reaction. Taking in the rise of my breast, the quick dash of my tongue on suddenly dry lips, the quiver of a lash.
This unrelenting attention made my skin prickle, my nipples swell.
I riffled in my purse for a stick of gum. There was no gum but I riffled anyway.
Honestly. How long could an elevator ride last? I focused on the lights of the header, ignoring his presence. Desperately trying to, at least, as his searing gaze lingered and stroked.
I was managing quite well, thank you very much.
Until he did it.
He made a noise I couldn’t ignore. It was something feral, between a grunt and a moan. A sound a lion might make, unconsciously, distractedly, upon sighting a particularly juicy gazelle. Or a female in heat.
I was not a female in heat.
More than one man had commented on my frigidity. The idiots. My coolness was merely a reflection of their ineptitude.
This man was probably not inept. A frightening truth for someone like me.
The sound, the growl, the urgent hungry groan, washed through me in a vibrating bass.
I punched the button for our floor several times in succession. It was a tell and I knew it, but I couldn’t help myself. Panic rose in my throat as the heat he sent off swirled around me, sank in and settled in my belly.
His interest in me had never been a secret. He’d tried flirting and sweet talk, he’d asked me out more than once but I always shot him down. I knew what kind of man he was. He had that vibe, that look, that alluring menace.
I knew what he was, for God’s sake. I could smell it, feel it, taste it. I’d been there before and sworn I’d never go there again.
Any woman with a pulse would think him attractive, what with that sable hair flopping onto his forehead, that square dented chin, that boyish insouciance belied by a satyr’s smirk. And, ah. Those deep brown eyes ringed with sinful sooty lashes. Those exquisitely molded lips. That hard athlete’s physique.
But not every woman would notice the simmering passion, the sultry sadism that called to a woman like me. Telegraphed in secret code. Tapping. Tapping on my nerves.
I did not want a man like that. Not anymore. A man like that would eat me alive.
Against my will, I caught a glimpse of his chiseled reflection in the chrome. He’d opened his suit jacket and tucked his fingers into the front pockets of his slacks. He leaned like a lazy panther against the mirrored wall and tipped his head back, studying the ceiling. His long legs were crossed at the ankles, showcasing immaculate Ferragamos gleaming with a high gloss. A crooked grin tugged at his luscious lips.
Mercy. Those lips.
Heat sizzled through me as I imagined those lips on me, sucking, nuzzling, nipping.
But that would never happen. He was not my type and I was not his. I wasn’t.
I told myself to look away but I didn’t do it quickly enough.
He straightened as we neared our floor. Adjusted his jacket. Shook out his pants. Raked his thick dark curls…
And caught my gaze in the mirror. Caught me staring hungrily.
Horrified by this wash of vulnerability, I turned my head. Our eyes locked again but this time directly, intimately, across the car. Tangled, tied.
His body stiffened, nostrils flared, pupils dilated. He leaned slightly, almost imperceptibly, toward me. His scent, his aura intensified. He held me immobile by the sheer power of his intent.
And then he licked his lips.
Something within me liquefied. My knees went weak and I nearly dropped my briefcase. Who knows what would have happened, what could have happened, if the elevator hadn’t opened at just that moment.
The welcome ding snapped me out of this lazy, hazy daze. I clutched my briefcase to my chest and rushed through the doors almost before they were open, doing a determined power walk to my penthouse.
He followed, slowly stalking. I didn’t hesitate. I waved my keycard over the lock and slipped inside. To safety.
I tried not to look back. Really. I did. It was only a quick glance but the sight of him standing next to his double-doored entrance, pinning me with a heavy-lidded gaze, rocketed through me like a fist to my solar plexus. There was heat in his eyes. And hunger. And certainty.
I shut the door, shutting him out. Shutting it out. He wasn’t my type. I wasn’t his.
A man like that could destroy the woman I was, melt the mask I had worked so hard to forge. I refused to think about him. I refused to want him.
I didn’t sleep all night.