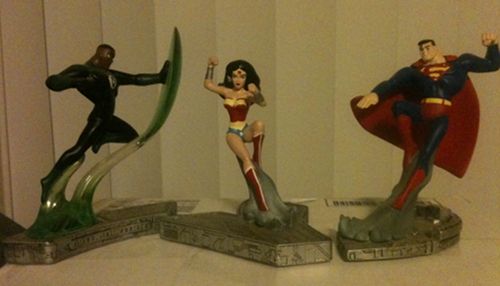 (Photo taken with my iPhone.)

These are DCU figures from the Justice League cartoon that aired on Cartoon Network back in 2001. Great show. Absolutely loved it. Any fan of DC or just Batman and Superman should totally watch this show. Don’t get hung up on the cartoons being for kids thing. This show is for all ages.

Anywho. This three statues are the lone survivors from the original seven figure series. I had all seven figures but… Batman, Hawkgirl, Lex Luther, and Martian Manhunter bit it when a speaker fell off the wall and crashed into them, knocking them off top of the TV. The whole set used to be in my living room.

Flash didn’t survive the move from MD to HI. The stupid movers just tossed him a box, no wrapping, nothing. He snapped in half. I’m still pissed about that.

Wonder Woman, Superman and Green Lantern are still standing. It’s like a Justice League comic issue or something. They sit on my mid-office bookshelf awaiting the day when I reunite them with the rest of the set. I do plan to get the others again (resurrecting them just like the comics do) but I haven’t done it yet.