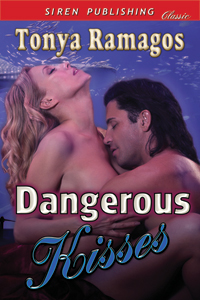 Homicide Detective Megan Pontius hungers for a dark side of sex she’s never experienced, and she knows the man to give it to her, if only he didn’t scare her to her toes. She’s kept her distance from aquarist Drake Allen, knowing one kiss could be dangerous to her body and heart. But when a mutual friend is killed and Drake is the primary suspect, she finds herself wondering if she’s submitting to the domination of a murderer.

Drake wants Megan under his control, and he wants her forever. He’s bided his time, waiting for her to be willing to set her inner lustful demon free. That time has come, and he’s ready to deliver her pleasures more exotic than any she’s ever known. But when he finds himself accused of murder, he discovers he needs Megan more than just in his bed. She’s his only hope of proving his innocence, but does she believe him?

“Time to stop punishing me, don’t you think?” she countered, her words quivering with her arousal.
“Almost.” Drake started walking again, his focus returning to the pier, to the spot he had already picked out beneath it. He led her there, the sound of the vibrator and her ragged breaths fueling his every step.
“Our cars are back that way.”
He had to hand it to her. She was a pro at keeping her composure, even with a sex toy lodged in her pussy, caressing her insides and keeping her right there on the edge. It had been his plan all night. He had watched her, turned on the bullet just long enough to put her within a hairsbreadth of coming before he wrenched the pleasure away.
“We won’t make it to the car, and we certainly won’t make it to your place or mine.” He stopped beneath the pier in a darkened spot that provided just enough moonlight for him to see her face. “Right here will do.”
He spun her around, released her hand, and unfastened his shorts. “Suck me off, Megan. I want to feel your lips wrapped around my cock.”
Wicked excitement danced in her eyes as she glanced around before meeting his gaze. “You know I could lose my badge for this? At the very least, I’d be in a world of shit if we get caught.”
Drake lifted a brow. “I thought you liked living on the edge of danger.”
Her lips unfolded in a grin of pure vixen intention and promised satisfaction. “I do.” She reached inside his shorts and briefs, curled her slender fingers around his shaft, and pulled his cock free as she sank to her knees.
Drake sucked a breath through clenched teeth as she started to stroke his cock, slow movements of her satiny hand up and down his shaft, working his length until he felt beads of pre-cum form on his cockhead. Her sinful lips closed around his foreskin, and she licked the pre-cum with a swipe of her tongue that had his knees threatening to buckle.
“Ah, God.” The words left him on a gasp as he closed his eyes, his head falling back to hit the stilt of the pier behind him. Her lips were like bands of silk tightening on the mushroomed head of his dick. She dipped her tongue through the slit in the tip, moaning low as she tasted his pre-cum treat, then tongued the head to the roof of her mouth as she explored the sensitized vein that ran along the underside of his cock.
Drake knew he had been blessed with a larger-than-average cock. Few sex partners had ever been able to take all of him. Megan did it, though. She swallowed his full length with such slow finesse that his hands buried in her hair, fisting the strands tightly as her lips met with the flesh of his body.
His balls quaked from the shock, his anus puckering as a riot of rapturous sensations sizzled through his body at the realization that she had swallowed him completely down her throat. She worked his cock with her lips, her throat, and her teeth until it was all he could do to hold back the begging pants that collected on his tongue.
“Fuck, baby, you have a wicked mouth.”
She moaned again, and the vibrations of the sound tormented him to the edge. Her hand slipped between his legs, found his sac, and rolled his nuts in her palm. His shaft tightened, release one more lick and suck away. He let go of her hair, gripped her upper arms, and pulled her back.
Her mouth made an audible pop as his cock slid free, and she looked up at him from beneath her long lashes, laughter twisting with the heat in her eyes. “I wasn’t done.”
He yanked her up, spun them both around to lean her against the stilt, and went to work on the button of her shorts. “Fuck yeah, you are. I’m not waiting another minute to be inside you.” He jerked her shorts and panties down, delved a hand between her legs, and sank two fingers into her pussy.
“Ah, God,” she moaned, her hips pumping against his questing fingers as he groped inside her for the still-vibrating bullet. “It would be easier if you turned it off first.”
“The remote is in my pocket.” And his shorts were around his ankles. No way was he taking the time to dig for it, especially when exploring her pussy felt this fantastic. Her inner muscles gripped his fingers, her juices drenching his hand as he found the bullet and pulled it free. He dropped it on the ground, straightened, and drew her against him as she kicked off her shorts and panties.
“Damn you,” he growled, fisting his hand in the back of her hair and tugging her head back to deliver a punishing kiss. She returned it with equal measure, her tongue thrashing with his as she wound her arms around his shoulders.
He dropped his arm from her waist to her ass and lifted her. Her legs locked around him, and he stopped with his cock poised to enter her dripping pussy. He wrenched his mouth from hers, using his hold on her hair to pull her head back, and gazed at her.
“Keep your eyes open when I push inside you. I want to watch you. I want to see that you know it’s me when I fuck you.”