No advice today, so I’m recommending a book.

The first chapter of this book caught my eye and I had to keep reading until the end. Very fun story. 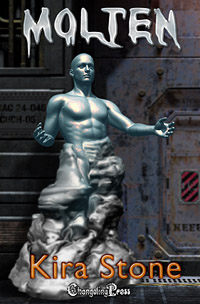 Convicted of fraud and condemned to serve as an indentured miner on a backwater way station, intergalactic translator Dolan knows more about Molten, the liquid metal that fuels the Parkeet station, than most. So when he’s ordered to mate with a being that on first contact looks like a pool of the stuff he’s been mining, he’s less than enthusiastic. But his alternative is death.

Zian has been searching the universe for Molten embryos that were lost when their solar system underwent a catastrophic event. His hunt leads him to Parkeet Station, where he plans to negotiate — or just plain steal — his babies back.

From Zian, Dolan learns more about Molten with each passing moment. Dolan’s first priority is to keep his newfound information from the station researchers. The second is to help Zian get his embryos off the station and back to the new Molten homeworld. But once Zian’s escape is secured, Dolan must choose — return to the only life he’s ever known, or follow his heart — and Zian…