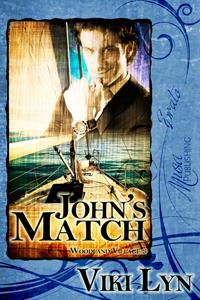 John Kramer discovers two guys humping on the hood of his Ferrari in the parking lot of the local gay bar. When he finds one of the pair alone and in a drunken stupor, John drives him home. To his surprise, the young man’s father is his new next door neighbor, Scott Marwick. Tempers flare when Scott accuses John of getting his son inebriated and taking advantage of him. John plans to never see the man again.

Then John’s boss flips out when he finds out the jerk next door is Scott Marwick, a temperamental, but famous fantasy writer. The elusive author could save their company from financial ruin if they can get him to sign over his characters for a computer game. Ryan insists John befriend Scott, show him around the Village and get him to agree to a meeting.

The last thing Scott needs is friends. He moved to Woodland Village to forget about the past and to write. Since his partner’s death three years ago, he hasn’t written one word, and his agent, publisher, and fans are clamoring for the final book of his award-winning series. His life is spiraling out of control and he doesn’t know if he can finish his series. He doesn’t need the complication of love and he certainly wouldn’t associate his name with a computer game.

But when John’s life begins to fall apart, Scott must decide where his loyalties lie—with John or his principles.

The tennis ball zipped past Scott. He’d lost the set, again. The tempting flex of muscles every time John served or returned a shot left Scott defenseless. He was too distracted by John in tennis shorts and shirt, his tanned skin golden against all that blinding white clothing.
John twirled his tennis racket as he sauntered up to the net. “Had enough?” He grinned, his teeth shining brighter than his tennis outfit.
“Haven’t played for a while,” he said. Damn. He hated losing to John.
“You’re good, just rusty.” John glanced at the clubhouse. “There’s a great sauna in the locker room. How about we call it night?”
Scott was still catching his breath “Sounds good to me. Don’t think I could go another set even if I wanted to.”
Although sitting naked in a steam room with John might not be the best decision. He hadn’t had sex in a long while. Just hook-ups when he felt the need. And kissing, that hadn’t been since David. He just couldn’t bring himself to be that intimate with another man. So why couldn’t he tear his gaze from John’s mouth?
Scott covered his racket. It had felt good to get physical, but he’d pay the next day, his muscles already screaming at him. He missed his early morning runs in Central Park. It had been a way to clear his head before starting his day. Maybe he’d start up a routine; the beach was a perfect location.
Scott walked into the locker room behind John, finding the place empty. “Where is everyone?” Okay, he could restrain himself. He was big boy and not some horny teenager, but damn, he wished there were other people milling around.
John took his watch out of his locker to read the time. “It’s a geriatric membership. They’re at dinner by now.”
Scott opened his locker and hesitated. Maybe John would have a drink afterwards. Then again, it was a Saturday night; John probably had a date.
Biting his lip, Scott cursed his shyness.
Just say it, coward.
“Dinner and drinks are on me, then.”
John peered from around his locker, already stripped down to his briefs. “Sure.”
Scott’s heart skidded as he caught a view of all that bronze skin and rich brown hair dusting muscular legs and a fine looking chest. He buried his head in his locker, embarrassed to undress in front of John. Taking a couple of deep breaths to calm the hammering in his chest, he convinced himself he had nothing to be ashamed about. Not his scrawny body or his average looks. John probably preferred confident men who paraded around in their birthday suits with no shame whatsoever. Not someone who needed a shave and a haircut. Shit. He’d let himself go without even realizing it.
John stood by the sauna door, a white towel wrapped around his waist. “Are you coming?”
Scott fingers itched to yank off that skimpy towel, the V-line of dark hairs disappearing beneath John’s waistline enticing erotic images. His dick hardened at the visual of John’s cock dancing in his head. John smiled—more like a predatory grin—one of his hands holding the towel close to his privates. Scott was already perspiring. He rarely played the role of aggressor. So why was he imagining himself sexually approaching John? He needed to get laid, but not with John.
“Yeah, I’ll be sec. Meet you inside.” Scott pulled off his tennis shirt and tossed it into his duffle. Never comfortable with public nudity, he’d strip in private.
Thank you very much.
The steam assaulted him as he walked into the sauna, clutching his towel wrapped around his waist. He breathed in the scents of cedar and eucalyptus, the hot mist already melting away his aches. Taking the top bench across from John, he stretched out and adjusted his towel.
Several minutes went by in silence. Since David’s death, men were a passing interest, without a thought after the sex. Scott didn’t believe for one second that was how it’d be with John. That’s why he had to stay put on the bench, keep his hands clasped over his cock.
A hand touched his shoulder, and he opened his eyes, not realizing he had been drifting asleep. Startled to see John, he jerked up his head. Their noses bumped, and he yelped, pulling back.
John’s laugh was muffled by his hand as he massaged his nose. “You pack a hard punch.”
“Oh God, sorry. You startled me.” He reached for John’s face. His fingers feathered across the square chin. “Are you sure you’re okay?”
“I hit you just as hard.” John traced the bridge of Scott’s nose. “Looks like we’ll both survive without too much damage.”
Scott’s heart skipped a beat when John smiled, those dimples tempting him. His need to touch John burned deep inside. Now was his chance. Should he take it? Did John want him?
John’s finger slid across Scott’s bottom lip.
Oh God. Yeah, he wanted John.
His mouth parted, and he sucked in John’s finger, smiling at John’s eyes flashing bright. John pulled it out slowly. Once released, John held Scott’s chin. There was no going back now. Scott kissed John.