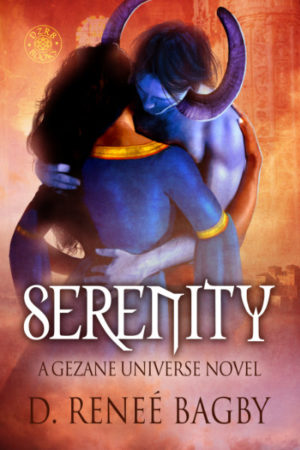 Melchior rose slowly from his seat, searching Serenity’s eyes. She looked serious. He asked in a low voice, “I thought your Hell Hounds were the only bhresyas to attack you, Serenity?”

“No. My Hell Hounds were the only bhresyas I kept. Queen Rhiannon indulged my whim only so far. All those after Mael died.”

“You know already, Your Majesty. I’m sure you’ve seen the collection of horns that grace the wall around my mirror. All belonged to those who came to Cheslav to kill me, except the white horn of the male who attacked me on my first day in Nexeu. Twenty-six in all and their owners are all deceased, except Guthr. The last nine came in rapid succession in the last few months before our wedding day.”

Melchior looked at her with unveiled horror. He hadn’t realized the extent of her danger.

Serenity gave him a curious look then frowned at the Hell Hounds. “I thought you explained all of this to him the day of our wedding.”

“Not every detail, Serenity,” Nym said. She bowed her head when Serenity glared at her.

Serenity turned back to Melchior. “I’m sorry, King Melchior. I was given to understand my Hell Hounds imparted this information to you already. I would not have treated the topic so indelicately if I had known you were ignorant of my many attacks at bhresya hands.”

Melchior shook his head, trying to clear his thoughts. He schooled his features into his normal mask of calm then said, “I am surprised, but that is no reason for you to apologize, Serenity. Your attacks weren’t your fault.”

“Twenty-six,” whispered one advisor. The other advisors were equally shocked.

Serenity’s smile returned. “If it makes you feel better, my lords, the humans wanted me dead much more than the bhresyas did. Nearly seven times that number attacked me over my eighteen years. My mother and I thought the news of my Hell Hounds would deter them, but it didn’t. However, human assassins never worried me. If they got past Queen Rhiannon’s guards, then they didn’t make it past Lorcan.”

“Leave us,” Melchior said. He tried to remain calm but the more Serenity said, the angrier he became. It was an emotion he had become intimately acquainted with over the last few weeks.

The advisors and the Hell Hounds exited. Once the door was closed, Melchior came around his desk and stood in front of Serenity. She smiled up at him. He couldn’t understand how she could smile after what she had said, what she had experienced.

Melchior wanted to lash out at those who had attacked Serenity. She and Rhiannon had robbed him of that right when they refused to contact him.

He asked, “How can you speak of your assassination attempts with such ease and disregard?”

“I am alive and they aren’t. It was my duty to stay alive so I could become your bride. If the assassins had succeeded, then the fighting between humans and bhresyas would have continued.”

She stepped closer to him. He smelled lust on her skin. The familiar scent had haunted him these many nights. Smelling it again was a blessing and torture all at once.

Serenity took another step forward. Melchior turned from her and walked away. Being close to her when he could smell her arousal tempted his control. She wouldn’t deny him, but he’d promised himself he wouldn’t touch her again.

He said, “We are married, but your duty has not changed, Serenity. You need to stay alive. The treaty only exists because we are married. Though no others have tried to hurt you since your arrival in Nexeu, you need to have more guards.”