Sooo… I said I would chronicle my first time cooking a turkey for Thanksgiving and here it is. 😀

After going out shopping one last time to get my meat thermometer (digital with timer as suggested by Alton Brown on the Good Eats Thanksgiving episode) and a flat turkey pan, I came home to start the first part of my turkey prep. 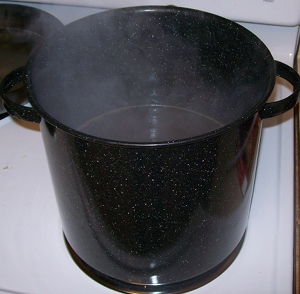 And weaving the bacon (thick-sliced peppered bacon) that will sit on the breast while the turkey cooks. The rest of the bacon will be wrapped around various parts of the turkey. 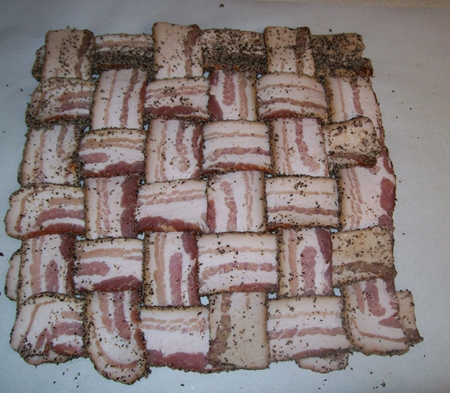 Time to brine the turkey. I did this late in the day for two reasons. I wanted it to brine overnight, and I didn’t want the ice to melt, putting the turkey in poultry danger zone, while I was sleeping.

This is the turkey in the brine, bucket and ice. 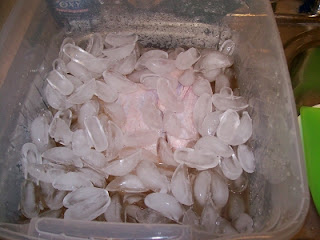 This is the bucket (with the lid on) sitting in the sink, which helped radiate the cold. I also covered it in a large garbage to help insulate it even more. 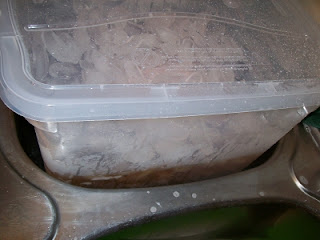 The ice totally lasted — still cubes there when I got up the next morning. Next year I’m getting a water cooler and doing the brine in that.

I got my happy butt up at 6AM (which is like six hours before I even think about getting up normally) so I could do this turkey. We were due at our friends’ house at noon, so I wanted to leave plenty of time in case of turkey shenanigans.

Sooo… this is the turkey after being in the oven for five minutes. I forgot to take the pre-cook picture. So I rushed in, whipped it out, took the picture and then shoved it back in the oven again. 500 degrees for 30 Minutes. 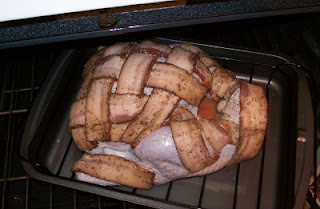 This is the turkey in the oven. 😀 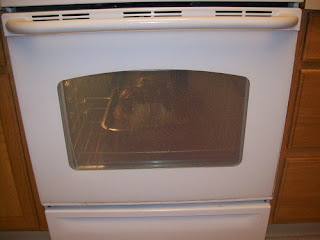 This is the turkey after dropping the temp down to 350 degrees and sticking in the meat thermometer (on the counter next to the oven). I really love this digital thermometer. You set the temperature you want (in this case 161 degrees in the breast) and, when the bird gets to that temp, the alarm sounds. No fuss, no muss cooking. 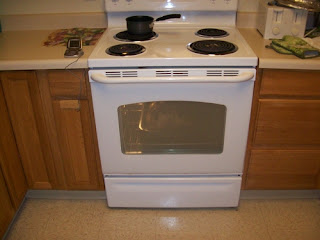 A little under three hours later… TURKEY! These are two pictures of the finished bird. The bacon isn’t burnt, just really, REALLY crispy. 😀 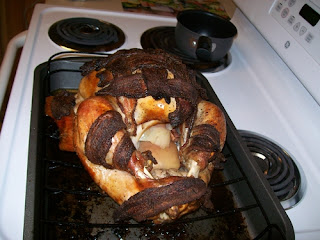 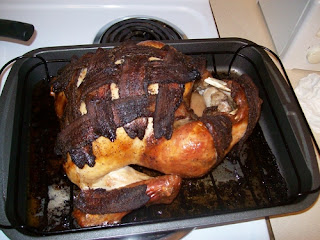 Wrap up the turkey and a quick trip for Andy, Tiff, and me out to Jared and Autumn’s place to have Thanksgiving dinner. Autumn made the most amazing Thanksgiving Apple Cider margaritas (pictured below). YUM.

The three bowls are for making rims on the glasses — one bowl has lemon juice, one has raw sugar, and the last has crushed graham crackers for the spiked egg nog served later. 😛 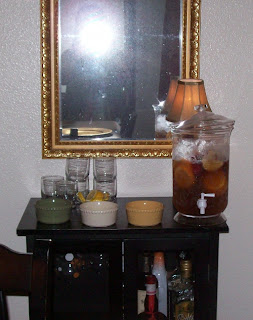 And this is all the food. The turkey in the left corner is not mine. That’s the second turkey. Corn bread, two types of gravy (white and brown), stuffing, two types of mashed potatoes, mac n’ cheese, candied yams,  and green bean casserole. 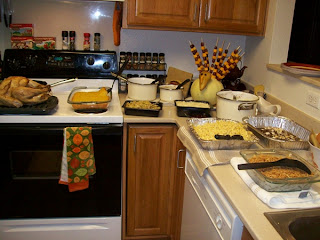 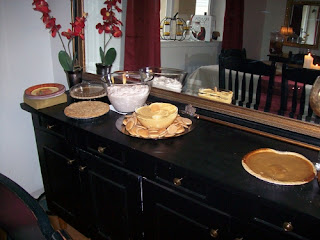 But you all wondering how the turkey turned out. I carved my turkey (first time doing that too). I can tell you I can’t carve worth a damn. I sliced off the first small piece and decided to do the taste test. I did cook it after all.

Juicy, tons of flavor, and a huge hit with all the Thanksgiving guests. Even after sitting out for the five hours of eating and yapping and then driving home, the turkey was still juicy and delicious. Everyone had tons of compliments for my first turkey. I owe it all to Alton Brown and Good Eats because that recipe of his is a total WIN.

Sidenote: The bacon is not part of Alton Brown’s recipe. I added that because I wanted to do a bacon-wrapped turkey. I will be using different (thinner sliced) bacon next time around.

I feel confident that I can do this again and I’m already looking forward to next year.