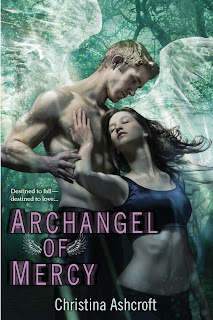 Archangel of Mercy
by Christina Ashcroft

When Aurora Robinson attempts to open a rift between dimensions to embrace her true heritage, an arrogant archangel is the only one who can save her from the jaws of hell. And while she owes Gabriel her life, she’s determined not to fall at his feet—despite the desire she feels whenever they’re together.

After his wings were brutally destroyed millennia ago, Gabriel has no compassion for humans like those who ruined him and betrayed the ones he loved. But when he inexplicably finds himself defying ancient protocols to rescue a woman from a fate worse than death, he is shocked by the searing attraction he feels for a mortal.

As the ancient forces that seek to punish Aurora for her actions close in, Gabriel offers the tempting woman protection at his private sanctuary. But as they both succumb to their desires, they discover an even deeper connection—one that threatens to consume them.

A muscled bronzed shoulder greeted her. Definitely male. His face was buried in the curve of her shoulder and neck, and a mass of tangled golden hair teased her cheek.
She hitched in a ragged breath, but not enough to clear the stupor that once again crawled through her brain. He wasn’t dead. She could feel his heartbeat, and it was strong. Gingerly she raised her right arm, the one that wasn’t pinned beneath him, and attempted to push him off her.
It was like trying to push against a mountain. A warm, living mountain, and with horrified disbelief she realized that her fingers were clinging to the taut flesh as if they were magnetized.
He didn’t move, but something stirred. Fingers still glued to his shoulder, Aurora felt her face burn as the unmistakable length of his cock thickened and nudged against her tender core.
The insane urge to part her legs whispered through her mind and if it hadn’t been for the fact it was physically impossible for her to move at all, she had the awful feeling she would have done just that.
Of course she wouldn’t. What was she thinking? Clearly she was oxygen deprived. Her dry spell was catching up with her, and her unexpected thrills on the astral planes were still creating havoc with her libido. There was no way she wanted to shag this stranger. She didn’t even know what he was doing there.
But she knew exactly what he was doing. His erection, even through his jeans or whatever he was wearing, was hard and demanding and angled across her swollen clit. A strangled groan escaped even as she dug her teeth into her lower lip and tried to block the spiraling need that claimed her womb.
She was being turned on by an unconscious man. It was sad and also, if she thought about it, slightly depraved, but she couldn’t help it. He might be out cold, but his cock was the hottest thing she’d felt in years.
His naked chest crushed her and even though she was still wearing her tank top and shorts, her fevered mind imagined them away. Her fingers trailed across his exposed shoulder and hovered over the tempting tangle of golden hair.
This was madness. She needed to pull herself together. Perhaps she could wriggle free? But even as disjointed escape plans hammered through her mind, she wound a silken strand of his hair around her finger.
This couldn’t be happening. Maybe she’d catapulted back into her body too quickly and this was all a hallucination? Did that mean that in reality she was lying unconscious on the ground? Was she seriously trying to convince herself that this was all in her mind?
His weight shifted; a slow realignment of heavy limbs as if, in the depths of his unconsciousness, he was slowly becoming aware of his surroundings. She froze, his hair still twisted around her finger in damning evidence, as his knees languidly eased her thighs apart.
Her heart thudded against her ribs and she tried to ignore the erotic tremors that claimed her sensitized clit. He wasn’t doing anything on purpose. There was no need to get so excited.
But there was a great need for her to drag back control, to squash this crazy lust distorting reality and—
He lifted his head from her shoulder and looked down at her. And her tangled thoughts vanished. For one eternal moment an overwhelming sensation of déjà vu quivered through her. As if his perfectly sculpted face, enhanced by a sexy five o’clock shadow, was as familiar as her own reflection. Mesmerized she gazed into his astonishing eyes, a swirling kaleidoscope of blues, greens and silvers. She had never seen anything so captivatingly beautiful and yet threaded through the awe was a faint echo of haunting recognition.
She might have continued to stare into his eyes forever if he hadn’t once again kneed her thighs farther apart. She gasped and deliberately broke the mesmeric contact as he settled himself more securely against her vulnerable pussy.
“What—?” Her voice was husky, a humiliating reminder of how horny she was for this complete stranger. Why wasn’t she petrified? He could be a crazy ax murderer for all she knew. And yet fear was the last emotion scalding her blood. She glared at his jaw, but his jaw was a thing of masculine perfection and it didn’t calm her skittering pulses in the least.
“Hmm?” The questioning rumble vibrated over her skin as he lowered his head and grazed his jaw along the curve of her cheek. Her mouth dried, throat closed and mind jellified.
For the life of her she couldn’t remember what she’d wanted to ask him.