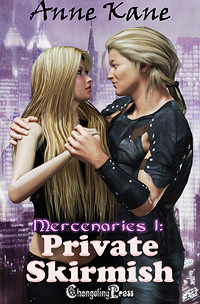 What do you do when the woman you love is up for auction? Make sure you’re the highest bidder!

When her little sister disappears, Dee vows to find her. She follows a lead to Loden Province but is picked up by Government troops and convicted of crossing provincial borders without a permit. The punishment? She is sent to be sold at auction.

As the auctioneer calls for bids, she hears a voice from her past. Kaeden! The lover she ran out on in order to raise her little sister. He’s found her again, and he has no intention of letting her escape a second time. He and his band of mercenaries will do whatever it takes to reunite the sisters and keep them safe.

She looked into the chilly eyes of her former lover. He had aged in the time she’d been gone. The harsh angles of his face were more pronounced. She still found him absolutely irresistible. “You here specifically for me, or just slumming?” No point in letting him know how quickly her heart rate soared when she’d heard his voice in the crowd.
He turned those beautiful blue eyes on her and actually growled. “Shut up. You have no idea how angry I am right now. I’ll deal with you once the paperwork is in order.”
“Yes, sir!” The snappy phrase was out before she had time to think, and she winced inwardly. Now was probably not a good time to annoy Kaeden any more than he already was. She snuck a glance from under her lashes. Was that a sparkle of amusement she saw in his eyes? He’d always said her smart mouth was one of the things he enjoyed the most about her. Maybe he wasn’t as pissed as she thought. Or maybe he was just happy that she’d managed to pick a fight with someone other than him this time.
Kaeden filled out the paperwork in his usual indecipherable script and handed over his cred-card. In short order they were free to go. Amazing how accommodating people got when the burly mercenary glared at them. She’d been on the receiving end of that glare often enough to understand.
He kept his hand wrapped around the end of her leash as they navigated their way back to the parking lot. Why wasn’t she surprised to find he’d brought the entire team with him? If there was one thing she loved about Kaeden it was his tenacity. Once he decided to do something, he made sure he had enough alternate plans to make it work. If he hadn’t managed to buy her, he probably would have started a small war to get her out of there.
“If you’d leashed her up to start with, we could still be snuggled up in the bunker with our beer.” Jackson, Kaeden’s second-in-command, unwound himself from the tailgate of the Hummer, humor twinkling in his dark eyes.
“I love you too, Jackson. You drink too much as it is, which is why you sleep alone most of the time.” Dee smiled fondly at the dark-skinned man. Jackson would move mountains if he thought anyone were going to hurt her. He treated her like an annoying little sister. All the guys did, but when things got tough they knew they could count on her to hold up her end of the fight.
Kaeden pulled a large knife out of his boot. “Hold still.” Using the tip of the knife to pry, he broke the collar open and pulled it off her neck. Tossing it on the ground, he ground it into the pavement with the heel of his boot. “Get in the vehicle, and get it moving. This place leaves a sour taste in my mouth.” Kaeden climbed into the Hummer, grasping Dee’s wrist to pull her in beside him.
“Aye, Sarge.” Jason Tremble a.k.a. “Snake” dropped the vehicle into gear and pulled smoothly out of the lot. “Back to the bunker, or do we need to make a pit stop for food? The princess looks like she could use a good meal or two.”
Dee felt heat stain her cheeks. She’d been so busy chasing down leads on her sister’s disappearance these last few weeks, she’d been skipping meals. She hadn’t realized that it was so obvious.
“We can feed her better at home base. Just get us there before I’m tempted to go back in there and start a riot. I hate these damn auctions.” Kaeden’s voice was gruff, and his fingers were still wrapped loosely around Dee’s wrist.
She sighed, forcing herself to relax. This wasn’t so bad. The team still thought of her as one of them. They were pretending nothing had changed. That she hadn’t quietly snuck out one night and left them all behind.