I’m finally filling the Sunday gap. My posting schedule has changed a little bit over the last few weeks, but you all have stuck with me. For your reward, join me every Sunday for excerpts. Not my excerpts, but excerpts from other authors who wish to entertain and entice you.

My first Excerpt Sunday guest is… 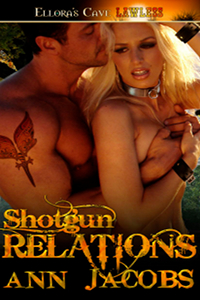 Jack Duval, country lawyer and bastard son of the Caden patriarch, first discovers rancher Liz Wolfe when he goes after her to spite his father. Soon, though, he learns she’s the submissive partner of his wildest fantasies.

No wine and roses. No declarations of undying love or even mindless lust. But Jack had allowed her no inhibitions either. When he had tied her to the bed he’d set her free.
That doesn’t make sense. But it’s true.
Liz lay there helpless, his cock down her throat, his arresting face buried in her shaved, incredibly sensitive pussy. Her nipples tingled where he kept grazing them with his lightly furred, muscular abs.
Her cunt clenched around his agile tongue. Pressure built inside her. She wanted to come. She didn’t dare. Not until he gave her permission.
She concentrated on feeling his slick, pulsating shaft moving against her tongue. The slightly salty taste of his flesh and his lubrication bathed the back of her throat as he fucked her mouth. His smooth ball sac tickled her nose each time he forced her to deep-throat him.
She couldn’t think of what he was doing with his tongue between her legs. If she did, she’d come, and he’d told her not to until he gave her permission. She made herself stop straining against her bonds and raising her hips to intensify the contact there. If she could, she’d have closed her ears against the slurping sound of him thrusting his tongue in and out of her sopping cunt.
Her arousal intensified so much that she began to like the feeling of his fingers at her rear hole. She’d told him he couldn’t fuck her ass but when he started moving his fingers inside her and sliding them slowly back and forth, she wondered how having his cock there would feel.
He enjoys anal sex. He said so. She could imagine someday letting him take her that way. She could even imagine enjoying it. What he was doing now felt good, not painful as she’d imagined it would be.
When he raised his hips and pulled his cock out of her mouth she felt abandoned, but not as fully as when he slid his fingers out of her ass and lifted his face from her pussy.
“Look at me.”
When she did, she saw white-hot lust in his eyes. His face glistened from her juices. She’d have said something but she remembered his warning.
“Go ahead. Speak to me. You’ve got permission.”
“Yes Master.”
“Am I your master?”
“Oh yes. Yes Master.” She wanted him. All of him. Every cell in her body screamed for satisfaction.
While she watched, he grasped his cock in one hand. “Do you want this?”
“Oh yes.” She thought she’d die if he didn’t fuck her now.
He shot her a supremely self-confident smile. “Where do you want it?”
“My pussy, Master.” Remembering the strangely pleasurable feel of his fingers fucking her ass, she decided it wouldn’t be long before she’d ask him to take her there. He’d already fucked her mouth and she’d loved that. “Please.”
He grabbed a condom and ripped the wrapper open with his teeth. His gaze never leaving her, he rolled it down his erection and went on his knees between her legs.
“Tell me your cunt is mine. Only mine. Tell me and I’ll give you my cock.”
“You want me for your slave, Master?”
“Oh yeah.” He rubbed his cock along her wet, tingling sheath. “Tell me.”
As much as her cunt ached for him to fill it, she wasn’t sure. “Explain what being your slave will mean, Master.”
His jaw clenched. “It will mean you hand over control of yourself to me, at least when we’re playing sex games. You’ll do as I say and I’ll do everything that doesn’t violate your limits to give you pleasure.”
She was afraid—afraid he’d steal her reason. Maybe he already had, because she wanted the exquisite pleasure nobody had come close to giving her before tonight. “My cunt belongs to you, Master. Only you. I want to be your sex slave for as long as you want me.”
“Good.” He found her pussy and slid inside. His rock-hard cock stretched her flesh as he sank deeper, deeper, until his balls lay heavily against her asshole and the thick, pulsating head of his cock pressed against the mouth of her womb. She’d never felt so full…so owned. “I like my tight little cunt,” he whispered against her lips before claiming her mouth in a deep, arousing kiss.
She liked his cock. And his mouth. He tasted like her juices and the chocolate wedding cake he’d chosen over a slice of the traditional cake at Bye’s wedding. Propped on his elbows, Jack massaged her breasts, paying special attention to her nipples. When he started to move, slow and deep, in her hot swollen cunt, she had to steel herself against coming.
He lifted himself up on his hands. The muscles in his arms bulged. He looked down at her as he fucked her harder and faster. “Come for me, sweet slave.”
“Oh yes, Master.” Freed from the rule he’d made earlier, she let herself go. She savored every sensation. His cock pounded her cunt and his balls tickled her rear end. She watched the contractions of his biceps as he strained above her. The pressure built inside her, and when she looked into his dark, mesmerizing eyes and heard him encouraging her to come, she found the deepest pleasure of her life.
She’d held back for too long. Now her Master had given her permission. As she looked down and watched his cock pound the pale, slick cunt he’d claimed as his own, she came in long, intense bursts. She was still coming when he stiffened above her.
“God yeah. Squeeze my cock. Yeah, that’s it.” He shuddered as he sank to the hilt inside her one more time. His cock jerked over and over until he finally lowered his body onto her and rolled them to their sides.