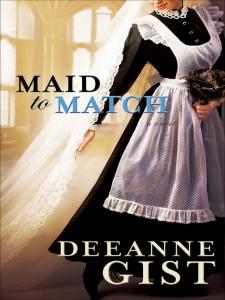 Maid to Match
by Deeanne Gist

Falling in Love Could Cost Her Everything

From the day she arrives at the Biltmore, Tillie Reese is dazzled–by the riches of the Vanderbilts and by Mack Danvers, a mountain man turned footman. When Tillie is enlisted to help tame Mack’s rugged behavior by tutoring him in proper servant etiquette, the resulting sparks threaten Tillie’s efforts to be chosen as Edith Vanderbilt’s lady’s maid. After all, the one rule of the house is no romance below stairs.

But the stakes rise even higher when Mack and Tillie become entangled in a cover-up at the town orphanage. They could both lose their jobs, their aspirations …and their hearts.

Mack Danver stood stiffly beneath the archway in front of Biltmore House as its heavy wooden door creaked open. His chest tightened. It might as well have been the entrance to Central Prison in Raleigh.
A middle-aged man in a dark navy suit stepped onto the landing, his jowls slackening. “Earl! What are you doing out here? And dressed like that?”
“I’m not Earl. I’m his twin brother, Mack. Mrs.Vanderbilt told me to come.”
The man sniffed. “I think I’d know if you had an identical twin, Earl.”
“You must be Mr. Sterling, the butler.” Mack extended his hand. “Earl’s told me about you.”
Sterling slapped his hand away.
Mack didn’t so much as hesitate. Grabbing the butler by the shirtfront, he propelled him backwards. “Listen, mister. When I say I’m Mack Danver, I mean I’m Mack Danver. When I extend a hand in greeting, I expect it to be taken. When it’s not, I take offense.”
“Mr. Sterling? Is everything—” A young maid stepped to the door. “Earl! What’s the matter with you?”
Black hair peeked out from beneath her small white cap. The eastern sun had reduced her pupils to dots, leaving eyes so blue they appeared almost lavender. Rushing out the door, she jumped between them, squaring off with Mack. “Stop it! Stop it right this minute.”
Releasing the man’s collar, Mack took a step back. Did she actually believe he was frightened of her? He felt the tug of a smile on his lips. “I’m not Earl, miss. I’m his brother, Mack.”
The disapproval she’d shown before was nothing compared to the horror that filled her eyes now. She pressed a hand against her stiffly starched apron. “Oh, no. You’re the brother?”
He nodded.
“And you came to the front door? What possessed you to come to the front door?”
“I was just looking.”
Rolling her eyes, she turned to the butler. “He’s a mountain man. He was engaged in fisticuffs when Mrs. Vanderbilt first saw him. I’ll take him round back myself and make sure he doesn’t get into any more trouble.”
Mack tucked his shirt into his trousers. “I can fight my own fights. You needn’t do it for me.”
She seared him with her gaze. “Do not say another word.”
He bristled and opened his mouth to argue.
She lifted her index finger. “Not. Another. Word.” With her finger still in the air, she turned back to the butler. “May I take him round back, sir?”
Tugging the hem of his jacket, Sterling tightened his lips. “Go ahead. I’ll talk with the housekeeper and tell you what we decide to do with him.”
Mack took a step forward.
The maid steepled one hand on his chest. With the other, she pointed toward the gate. “That way, Mr. Danver. The servants’ entrance is that way.”

BIO:
Deeanne Gist–known to her family, friends, and fans as Dee–has rocketed up the bestseller lists and captured readers everywhere with her very original, very fun historical & contemporary romances. Add to this three RITA nominations, two consecutive Christy Awards, rave reviews, and a growing loyal fan base, and you’ve got one recipe for success. She has a very active online community on her website at IWantHerBook.com and at Facebook.com/DeesCircle.