The 11th Hour… Every procrastinator in the world knows that phrase because it means waiting until the last minute to get everything done.

I’m a serious procrastinator and getting ready for RT Con 2008 finally enlightened me as to why. 🙂

The weekend before RT Con 2008 (April 10-13) I had to get stuff ready to send off to the hotel via UPS. Originally, I didn’t know I’d be mailing off my contributions to the bookseller bags (gift bags prepared for 100 booksellers attending RT). I thought I’d arrive (I drove), hand over my contribution then go on my merry way. Though, it totally makes more sense to send it in early since most people arrived early and the RT Con staff wanted the bags waiting for the people not vice versa.

So, I took over the floor of my living and got to stuffing. I made two types of gifts. The first was the bucket gift. A small tin (or maybe it was aluminum) bucket with embossed hearts all over it. I stuffed inside this bucket a romance-theme-shaped soap (pair of lips, twin hearts, a heart with words like “true love”, etc), a tiny shower puff, a single use personal lube, a condom, two business cards (one to keep and one to give away) and a promo CD. 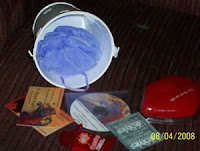 The second was the plastic champagne glass. Inside this, I stuff cellophane and silver shred, a tiny champagne bottle party popper, a red/pink rose, a scented heart red/pink tea candle, two business cards, a single use personal lube, a condom and a promo CD. In the case of both, I wrapped them in a gift bag. 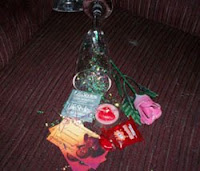 That was a lot of work and it took almost five hours. I thought it wouldn’t take more than two hours. But, my issues with accurately predicting time needed for a project are a subject of another topic. ;P

The very next day, I got it all boxed up and over to the UPS store so they could ship it to the hotel by the due date, which was no later than 12 April. A 56lb box going UPS ground, using some of their packing material, cost about $78. Not bad for the 11th hour, huh?

I pulled it off, but you’re probably asking what did I learn. Simple, I leave stuff until the last possible minute so to make myself stop over-thinking the project ahead. I had planned something much more elaborate with the champagne glass gift that included a tiny metal basket (used those later) and I was having issues figuring out how to bag the champagne glass due to its length.

11th hour means stop messing around and get it done before it’s overdue. I axed the basket with the idea that I could use it for another promo some other day. The idea of stuffing the glass in the gift bag so the stem stuck out the bottom and tying it off that way came to me while doing the buckets.

I agree with the many who say procrastination is bad. If you can get stuff done early and have it ready, that’s all the better. But for the people like me who work well under pressure, sometimes the 11th hour is the best time to do things. Though next year, I’m getting everything made and finished in March so I’m not so stressed in April.