Oh yes, there is more last minute madness to be had. You remember those little metal baskets I mentioned in the 11th Hour post. Well, they found a home in the Samhain giveaway bags. At first, Samhain hadn’t planned to do giveaway bags since they had so many left over last year, but they decided (last minute) to do them but only 80 instead of 250.

Unfortunately, I only had 50 baskets since I’d originally planned them for the bookseller bags. But that was okay. 50 was better than none, right? So, I used my remaining gift bags, candles and condoms and paired them up with business cards and bookmarks. Then, viola… instant gift. By this time I was a gift bag stuffing pro since I had spent the night before stuffing 400 recloseable bags.

What was in the recloseable bags, you ask? That was my promotional lane materials. I had heart-shaped York peppermint patties, heart-shaped cherry lollipops, bookmarks and business cards. 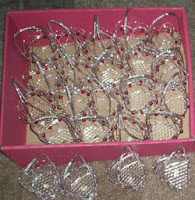 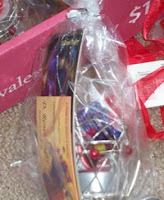 Originally, I had planned to do surprises in each bag and have tissue paper obscuring what exactly was in the bag so people wouldn’t get all the really good stuff. Well, you know what I said about the 11th hour in my last post. I was two days away from driving to RT Con 2008 and in no mood to screw around with sizing and cutting tissue paper and whatever else I would have had to do to make it oh-so-pretty. Not to mention, I really didn’t feel like adding anything else to the mix. I had a few condoms left over so a few random bags got those, but that was it so far as extras were concerned.

In one night, while watching Highlander: The Source (oh, don’t get me started. There’s a post about this coming up, you can be sure), I got my Samhain contribution and promo lane stuff stuffed and ready to go.

The very next night/morning (Wednesday 16 April), I hit the road for my 4hr road trip to RT Con 2008 in Pittsburgh, PA. I had originally planned to pack the car the night before so I could just get up, wash off, jump in the car and go. Well, the 11th hour kicked my ass and I was too exhausted to pack the car (this would be one of the pitfalls of procrastination).

Instead of being on the road at 4am, I didn’t get out of the house until 4:30am. I didn’t really get on the road until 5am since I stopped to get breakfast from Dunkin’ Donuts. Overall, the drive was completely uneventful. There was literally no one on I-70 East. I saw one car every few miles and a truck a little more often. That was the lightest traffic I’d ever seen… until I hit Pittsburgh.

I made wonderful time, only speeding a little (I never go more than 10 over the posted and that rule has served me well). Then I hit Pittsburgh and my good time went to pot. Traffic was a parking lot for 5 miles out. I kept calling Stephanie “Flash” Burke and Wendi Felter (owner of RRP) to chit-chat just so I wouldn’t be bored.

When I finally got into Pittsburgh, I got lost on my way to the hotel. With me, that’s bound to happen. I’m very good at getting lost. Though, I’d like to partially blame the Hilton’s construction and the big rig accident. There was a big rig accident right in front of the hotel. In my bid to avoid the accident traffic, I turned right when I should have kept going straight. I didn’t realize the hotel was right in front of me since all I saw was the ugly construction.

So, I’m cruising along trying to figure out where the Hilton is when my gas light starts blinking. Oh crap! Now, the general rule of thumb is that you have at least 50 miles once the little light starts blinking. Not with my car. I have 30-40, depending on if I’m in the city or on the highway, since I only have a gallon of gas left.

Well, I was frantic to find a gas station since I didn’t want to be stranded in an unknown city. THERE WERE NONE! I had to drive five miles out the other side of Pittsburgh just to find a stupid gas station, which ticked me off. But, I got my gas, I didn’t have to walk, and I was on my way back to the hotel.

After getting turned around and calling for directions (which got me even more confused ’cause the operator didn’t know the city as well as they professed), I arrived at the hotel at about 9:30am. I was pleasantly surprised when they let me have my room since check-in was at 3pm. So far as the hotel is concerned, that was the last good thing to happen.

Hotel valet parking was full, so I had to drive down the street for self-parking. The hotel has trolleys to carry your stuff to your room but the guests can’t man them, the bellboys have to do it (tips and all that). Well, I didn’t know I had to wait in my room for the bellboy so I went out and parked my car before it got towed, which is the impression the valet-greeter gave me when I left it to take care of check-in.

I got back to my room thinking my stuff would be there and it wasn’t. So I called down to find out what happened and they sent the bellboy up again. After relaying via phone the parking situation to Flash and Wendi, I went down to see what was what.

I met up with lots of people (duh). The biggest to-do of the day was Wendi’s room not being ready. As I said before, check-in was 3pm but her room wasn’t ready until almost 4:30pm. Naturally, they complained to the manager and corporate and got a lower rate because of it.

Thanks to the madness of check-in and waiting around for people and trying to meet up with people I didn’t get to any panels. I managed to get my promo out (there’s a side story I’ll post about later) and got some food.

Wednesday night was the ebook fair. I got to sit next to Nicole Austin and we chitchatted the time away. That two hours went quick. Nicole (and the other EC authors) had to cut out early so she could get ready for the EC Hollywood party.

I managed to meet lots of lovely readers and booksellers and other authors. I got business cards and I think I even hooked a few new readers (I hope). My ploy for getting attention was wearing my jaguar-eye contact lenses and having my black panther plush Kuroisama on the table. I got lots of questions about him and everyone loved him. He’s definitely visiting RT Con 2009.

The EC party was great fun. Flash, Den (her husband), and me danced the night away. The music kept switching from modern to 70’s but it was all good. Flash and Den scandalized a few people when she threw her leg on his shoulder (that woman is flexible despite her many run ins with cars and shopping carts).

I was so thankful to finally hit the sack that night.