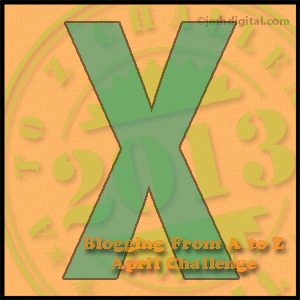 X is for Xenophile… in case you haven’t noticed from a few of my posts already, I qualify as a xenophile of Japan. And xenophile was the only X word I could think of. 😛

Okay maybe attracted is the wrong word… sort of. Do anime/manga characters count? They are Japanese after all… sort of… partially. Some of them are… kind of. Just ignore the random hair colors and impossible cleavage on some of the female characters (kitty ears and tails too) and they could totally count as Japanese.

If I had to trace my fascination to a particular source in my past, it would have to be the years I spent on Kadena AB in Okinawa, Japan as a kid. I got introduced to Japanese culture during elementary school. It was really different from the elementary school I attended later in Texas. Really, REALLY different. I preferred the Japanese school.

Add to that all the anime and Japanese cartoons that got translated and imported to the US — some of it without me even realizing it had originated from Japan — in the 80’s and I was pretty much sold. I’m not talking Sailor Moon and Dragon Ball Z — besides that was 90’s. Before that. Grimm’s Fairy Tale Classics, Noozles, Voltron (no, I didn’t realize when I was watching it that it was from Japan. I figured that out later in life.), Maple Town, the butchered Warriors of the Wind (re-released in the 2000’s in its entirety under it’s real title Nausicaa of the Valley of the Wind) and a few others I can’t think of right now.