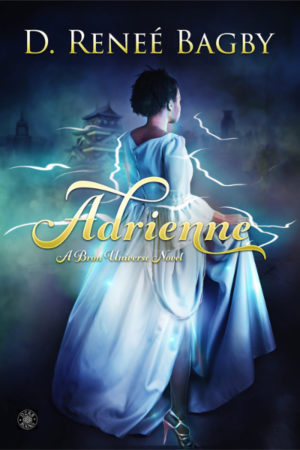 She’s the queen he will have at his side, even as death threatens to keep them apart.

Coming up on the last spring break of her college career, Adrienne has more than earned a week of rest and relaxation. But a late night on campus leads to an assault by a former classmate who ends up killed by Adrienne’s rescuer… with a sword. Just when she thinks her life can’t get any more surreal, she’s whisked away to a magical dimension where she’s expected to be queen. And turning down the position isn’t an option.

Malik is king, but he won’t be for much longer if the spell he enacted doesn’t find his bride. He’s racing against time to keep his kingdom out of the hands of his enemies. When his bride is located, he doesn’t hesitate to eliminate all obstacles to claim her. But he’s about to learn being an absolute monarch means nothing in a marriage to a woman whose temper and passion matches his own.

The honeymoon has barely started for Adrienne and Malik when a new threat rips them apart. There’s more than one way to steal Malik’s kingdom, and his usurpers have chosen the route over Adrienne’s dead body. This time Malik will need more than magic and a sword to save her. He’ll have to put aside a generation’s long feud and trust his enemy if he hopes to get his queen back alive.

Note: This title was previously published.

He removed her gag, then cupped her bound hands in both of his.

She tried to pull away but he held her. “Don’t hurt me,” she rasped.

“I do not plan to, my lady,” Malik soothed in a low, soft voice.

Her language, while remarkably similar to Oteino’s, felt cumbersome in his mouth. He wanted to use his own but decided the magicks needed to bridge the communication gap could be better used elsewhere.

With a single thought, he melted her chains. His bride’s earlier struggles had torn the skin around her wrists. Blood seeped from her wounds and coated her hands.

It was simple enough to heal her the way he had melted her chains, but Malik couldn’t help but make the act more intimate. He brought her wrists to his lips and breathed the healing magicks over her skin.

His bride opened her eyes and watched him.

He smiled at her.

Correction, she was confused. The emotion felt like itself instead of a temperature. Malik knew he wasn’t confused, so the emotion belonged to her.

The chill of her fear started ebbing away. He took that as a good sign. With slow movements, he rose to his feet and pulled his bride to stand next to him.

She snatched her hands from him and rubbed her wrists. The feeling of her confusion intensified. She looked down at her hands, then back up at him. “What?”

“I am Malik of Ulan, my lady. Your servant,” he said with a bow.

Malik told himself to stop staring at her so intently. The feel of her fear had returned, and she looked ready to run. He reached for her hand to hold her at his side.

“I should go home now,” she said with a tug of her hand.

“Would you leave in such a state of disarray?”

Adrienne looked down at herself and gave a cry of shock. She snatched her hand away from his and pulled her shredded shirt together over her naked breasts.

Malik swept out his hand. A cloak appeared out of nowhere and he placed it over Adrienne’s shoulders. He brought the ends of it together in front of her.

She grabbed the edges of the cloak with a murmured thank you.

He smiled at her bowed head. “Such as this is my pleasure, my lady, as I would do anything to make you happy.” He stepped closer to her, which forced her to look up at him. He asked softly, “Shall we return?”

“Return? Yes, I need to go home. My parents will be worried. If you tell me your address, I’ll mail this cloak back to you.”

“You misunderstand.” His voice remained low and soothing. “I meant my home.” He slid his hand around her waist and pulled her close. The action indulged his baser needs. He recognized the lust he felt. What he didn’t understand was his urgency.

Even when he was new to sex he had never felt this anxious to be with a woman. Something about Adrienne made him want to forget all the rules and have her now.

“Let go of me. I’m not going anywhere with you.”

Malik bent to place his other hand under her legs and lifted her effortlessly against his chest.

“You could, as it is your right. I do not see the merit in it and think you would be better served with rest rather than theatrics.”

“I’m not… I…” Her words stumbled to a halt as sleep claimed her.

He smiled at his sweet burden.

She would understand once he explained the entire situation to her.