The exhaustion is catching up to me quick. Today was a lot more laid back. I ran into Leanna Renee Hieber on the way in and chatted with her a little bit. She looked amazing in her Victorian garb, as usual. I also met C.L. Wilson in the Exhibit room.

I did two panels. The first was a CGI panel that was more technical and meant for film students so I didn’t stick around. The second was a Transformers universe panel. I learned a few tidbits about the upcoming Transformers III movie. Like:
– Megan Fox isn’t in it
– Looks like Optimus Prime will have his trailer (finally!)
– We might see Shockwave
– Soundwave may have a bigger part
– Due out July 2011

After the Transformers panel, the idea was to attend a Star Wars art show in the main lobby of the Marriot. Well finding the main lobby was a pain. While looking for it, my brother and I discovered the second exhibit room, which was across the way from the first. We had totally missed it the first two days.

We thought we’d do a quick look around and then head out to the Star Wars art. That didn’t happen. The very first booth we saw when we walked in was a 50% off all trade paperbacks comic booth. There were no fewer than thirty long comic book boxes FULL of trade paperbacks and trade hardbacks. My brother and I spent at least an hour, if not more, going through each box. Everything was mixed so there was no other way to fin anything except to go through each box.

I spent $80 adding to my Savage Dragon collection (yes, I have started reading and enjoying Savage Dragon recently). I also got the first few trades of Dawn. I’m going to get Lisner to sign them when I go back tomorrow.

I had a shake-my-head moment. I stopped by one booth where someone was selling the shirt I was wearing. I was curious to see how much they were charging for it since I paid $7.50 for mine at Wally World. The guy looked me in the eye and said it was $22. I looked at him like he was crazy. It’s sad to think that (A) some poor idiot actually paid that price, and (B) the vendor probably got his shirts from Wally World just like me.

I took a lot more pictures today than any other day. Not for any other reason than I had more energy than the first two days. Besides, I plan on stealing copies of my brother’s pictures. So there was no need to do repeats.

I have officially crowned the BEST Dragon*Con 2010 costume. Without even seeing every single costume and knowing there is one day left, I have decided. I’m also biased since I LOVE this character. 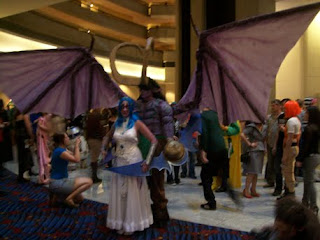 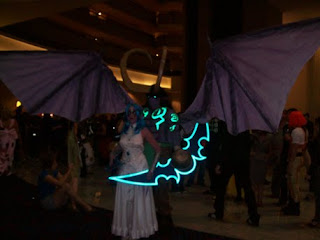 Look at that and tell me that costume does not kick ass! It glows. When you take a picture with a flash, he glows. My camera is crappy, admittedly, but the pictures turned out okay. My brother’s pictures came out much better.

But there you have it. The BEST costume at Dragon*Con 2010, in my opinion. I love Illidan Stormrage and this guy did the costume justice. I’m so happy I was in the Marriot when he was. I would have hated to miss this costume.

I’ll upload some other pics to my FB account after I get home, but I had to share those two right now.

That was my day at Dragon*Con. One more left and that’s a half day. Then it’s back home again for same old, same old.