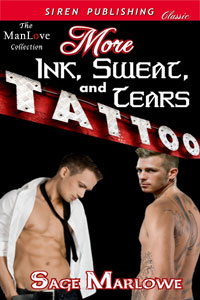 One year into their relationship, tattoo artist Caelan Stokes and tax accountant Dean Fowler make their love official and tie the knot—er, insert the rings. Things couldn’t possibly be running any better for them, but the first crack in their picture-perfect married life appears soon when Dean tries to make Caelan face his past. Abandoned by his biological parents as a baby, Caelan is far from wishing for a reunion and is extremely upset when he learns that Dean has tracked down his birth mother.

Shortly afterwards, a silly mistake costs Dean his job. His resulting feelings of inadequateness and depression are beginning to take their toll on their relationship, and Dean and Caelan have to ask themselves if the love they built on ruins is strong enough to withstand these trials. But even as they struggle along, a blow of fate neither of them saw approaching could put an end to life as they know it.

Somehow they made it up the stairs and into their bedroom, scattering garments in their wake. Peeling Caelan out of his clothes never failed to excite Dean. He loved uncovering all those long stretches of pale skin and the black ink ornaments in it. He had traced every inch of them with his fingers and tongue, had come to know every single line by heart, but it was still alluring.
Caelan was lying in front of him, stretched out on his back. Naked and in all his tattooed glory. Kneeling between his legs, Dean devoured him with his eyes.
“You’re so fucking beautiful,” he whispered, hearing the awe vibrate in the deep, throaty sound of his voice.
A light frown flickered across Caelan’s face. He seemed a little self-conscious, but Dean knew that he liked flattery as much as the next guy. Except it wasn’t flattery—it was the truth. Caelan was an exquisite creature. Beautiful, gorgeous, sexy, sensuous, naughty… There weren’t words enough to describe him, but best of all, he was Dean’s now. And Dean fully intended to assure them both of that fact.
Reaching out, he placed his hands on either of Caelan’s knees and followed the strong, sleek-muscled thighs upwards. Enthusiastic as always, Caelan tilted his hips. As if Dean needed reminding where Caelan wanted his touch. His rock-hard, proudly straining cock alone was waving for attention with the quiet intensity of a flag pole and Dean was tempted. Very much indeed. He noticed the beads of pre-cum glisten on the head of Caelan’s handsome cock, and already he could almost taste Caelan’s unique flavour on his tongue.
Not yet, though. He was far too excited to take Caelan so early. Chances were that he would lose the grip he’d been struggling to keep on himself for so long and topple over the edge like a randy teenager. No way was he going to risk the perfection of their wedding night by coming prematurely.
Gently stroking the smooth skin under his hands with barely more than his fingertips, Dean bypassed Caelan’s groin. Caelan promptly moaned his protest.
“Shh. We were going to take it slowly, remember?” Dean soothed and trailed his hands along the flat, hard plane of Caelan’s stomach. Those abs were really something worth lingering over but Dean let his fingers climb higher, briefly tracing the curve of Caelan’s ribcage, then he closed in on Caelan’s nipples. He pinched them simultaneously. Hard. Caelan let out a little scream of pleasure. Both small nubs filled instantly under Dean’s touch. Well, the right one did, anyway. The left one never had much choice as it was forced to always stand to attention by the metal stud in it.
Sitting up, Dean lowered his head over Caelan’s chest and flicked his tongue across the three tiny beads. Metal bead, nipple, metal bead. Caelan sucked in a breath. He loved having his nipples teased, and Dean loved playing with them. Biting down, he carefully intensified the pressure until Caelan jerked and let out a warning hiss. Dean soothed the assaulted flesh with generous caresses of his tongue, then moved on to the other nipple. That one was easier to play as it required less attention, but the effect it had on Caelan was much the same. Dean could have kept going on for much longer. And he did, alternating the gentle strokes of his tongue with the sharp grazing of his teeth, slowly but surely driving Caelan out of his mind.
“Fuck, Dee, please,” Caelan pleaded huskily after a while. “I’m too close, baby. I still want to feel you inside me—please.”
“Hmm, I think I can do that.” Dean grinned and sat back, once again enjoying the sight. Caelan’s arousal was so obvious and he looked all the more enticing for it. His fingers were clasping the sheets, desperately clinging on, and his head was tilted back as his body arched up in a long line of excitement begging to be satisfied. The truth in his words was easy to spot. He was too close already. No way could Dean prepare him for a fuck without risking to tip him over the edge. He seemed barely able to fight his orgasm as it was, so maybe a slight change of plans was required.
Wriggling down on the bed, Dean brought his head to Caelan’s groin. He wrapped his fingers around the heavy, throbbing shaft and carefully squeezed it right at the base. Caelan groaned. He didn’t like that treatment much, but it helped him hold back. At least for a few more, precious moments.
Dean flicked his tongue across the head of Caelan’s cock, gathering up those tantalising, glistening pearls of pre-cum. He was still a little hesitant, but dared himself to touch the ring. It shifted a little. Caelan’s breath hitched and Dean gathered confidence. He carefully threaded the tip of his tongue under the ring and tugged at it, lightly at first, then, when Caelan let out a long, ragged moan, a bit harder…