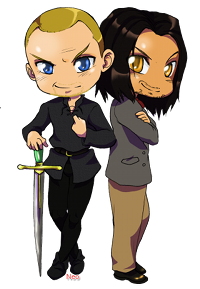 The original draft of ERIS (Eternal Truths, Book 1) was a typical Mainstream Romance between Lucien and Eris with Ranulf as a close friend to the couple in a completely platonic way.

I wrote out the entire story under that premise, read over it, and decided it couldn’t stay that way. For one thing, I had made Ranulf’s part in the story quite large. He acted as a mediator between Eris and Lucien, keeping their relationship on track when emotions started running high.

In the original draft, I even hinted at a possible relationship between Eris and Ranulf, but Eris only loved Lucien. I knew, if I published that version, that readers would be emailing me asking when Ranulf would get a story of his own. I didn’t have one to give him and didn’t want to think of one. Plus it made no sense, no matter how close their friendship, to make Ranulf immortal alongside Lucien.

Suffice to say, I threw out the original draft for the current incarnation. I’m very happy with how it turned out.